Got my balls handed to me in a bag by Martin Garner on the Birding Frontiers site here. Assuming I’ve got the ID wrong, which I have to admit to more likely than Martin getting it wrong, this is pretty frustrating. While we all make mistakes, blah, blah, I watched this bird for a good while, took some notes and some reasonable photos of it and even went back and looked at some old field notes of Coue’s and ‘difficult’ Mealies I’d seen and did a quick look around the interweb for pics of 1w Coue’s. All in all, a couple of hours effort, so still getting it wrong is bloody annoying.

I should probably leave this alone, but instead I even went as far as picking up Svensson. One of the obvious features of the bird is that it’s regrowing its tail feathers. In my original shots it has three long ones on its right, the rest being very short. More recent shots show that the very short ones have grown substantially. Svensson says that Arctics moult like Mealies, which means a complete moult Jul-Sep so fresh tail feathers, whereas first year birds moult “..rarely one or two inner pairs of tail feathers, but not wing feathers or outer tail feathers”. The adult tail feathers can be pointed or rounded while 1Y birds are, as you’d expect, pointed. The Titchwell bird’s tail feathers are fairly pointed so in theory it could be an adult or a first winter. But since this bird is regrowing all of its tail feathers now (as more recent photos show) that seems to mean it should be an adult (or maybe 2CY?) rather than a first winter. Based on the warmer mantle and flank streaking this is presumably an adult female.

If it is an adult, then does this change our interpretation of the flank streaking and ground colour – can adult Coue’s really get this dark and streaky? Obviously all adult Coue’s don’t look like this: 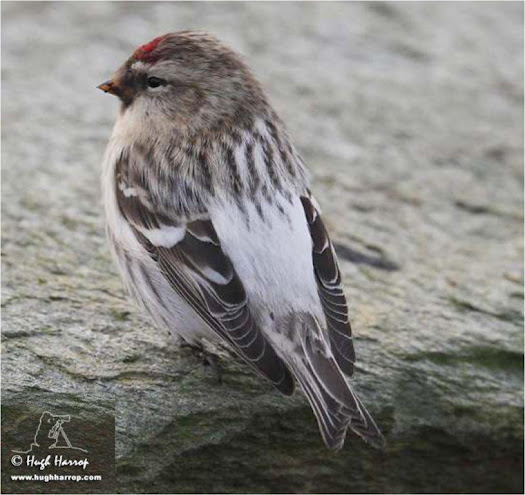 So what ID features are we supposed to use, for both adults and immature? I also found this rather neat little chart from David Sibley in the US  where he comes up with a ‘character index’ that uses patterns of the undertail coverts, flanks and rump. It works by assigning a score to each of these characteristics and a range of scores that allocate a bird to Mealy, intermediate or Arctic. I don’t know how much road testing this has had but it is interesting. 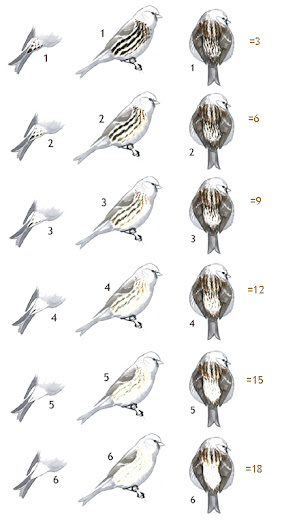 Treating this chart as being fairly valid, the Titchwell bird scores maybe, with spurious accuracy, 4.75 for UTCs, 4.5 for rump and around 3.75 for flank streaking for a total of 13. Anything over 11 for a female or immature counts as an Arctic according to David’s scoring. Interestingly the associated notes also say that ‘no female-type scored higher than 13’ (although reading this more closely it’s clear that the chart was rebased so that the lowest score could be one rather than three which would imply that no female type had a score higher than 14 or 15 depending on how it was rebased).

Comparing my notes and memory with the Titchwell photos, it’s hard to find any pics that show the warm and darker tones properly that were visible in some lights in the field. I think part of the reason for this is that we usually see winter redpolls in bare trees against a relatively bright sky. When we take photos, to get the detail on the bird, we jack up the exposure compensation a few ticks, I often use +2/3, +1 for this. Even with careful metering this can easily make colours look paler than they really are. In the field the bird had some darker tones in the upper quadrants of the mantle (but not the centre) and on the shoulder part of the scapulars. This faded out to the blond-buff ground colour of the scaps above the greater coverts, towards the centre of the mantle and neck/ lower nape. The centre of the mantle was off-white (sometimes showing as two tramlines) as was the lower crown and upper nape.
Warm mantle tones and tramlines are often called as Mealy features but they seem to be regular in exilipes. This shot of one of the Rainton Meadows birds from Feb 2011 shows a similarly warm mantle with white tramlines. 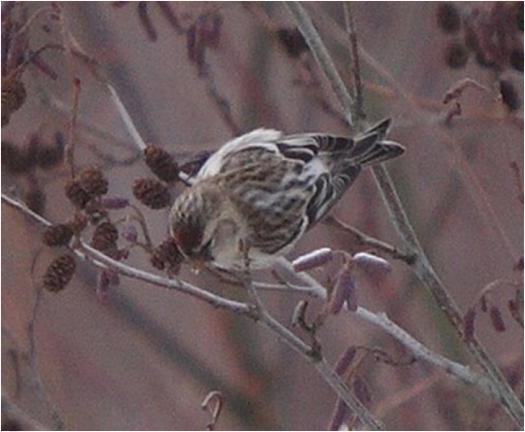 The streaking on the Titchwell bird looked fairly heavy from some angles and could appear quite smudgy, especially on the flanks where they are classically lighter. 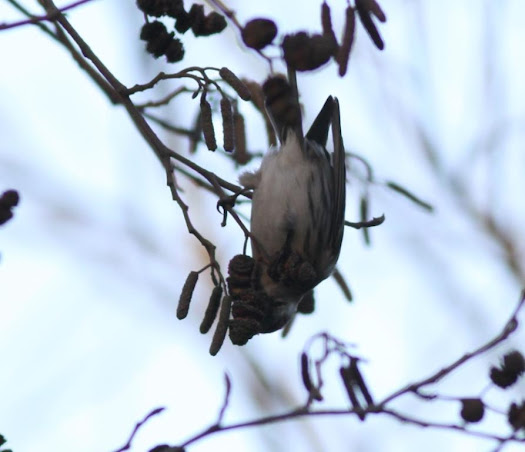 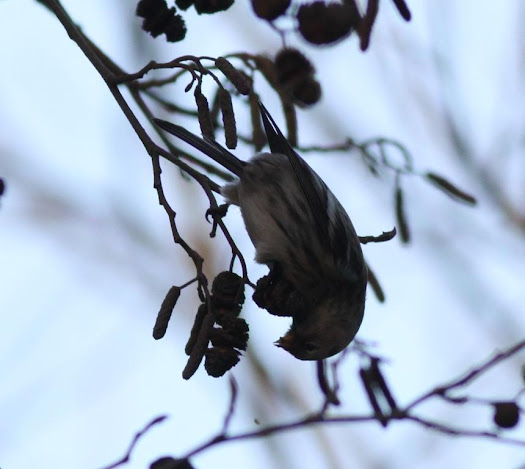 But some undoubted Arctics have quite heavy streaking – like this one from Ontario (Canada) although here it is on a white ground colour. 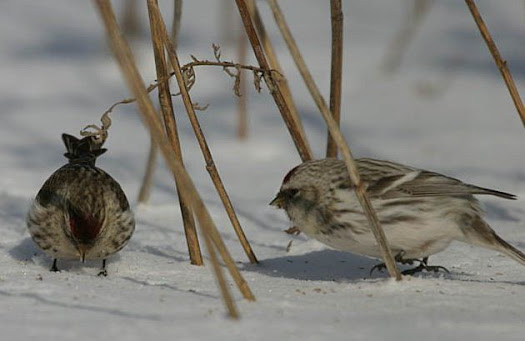 I just don’t see the ‘pinched in’ or ‘small’ bill that others are seeing in the Titchwell bird. To me it looks well within the range that you get in Mealies, although smaller than average. In fact the idea that Arctic always shows a smaller ‘pinched in’ bill and ‘punched in’ face seems to be pretty unreliable. While there's clearly a good percentage of small-billed Arctics with feathering around the nares giving this punched in face it doesn’t seem to work as a diagnostic feature. Again from Svensson and from Troy (2005) it seems there's little difference between the actual bill length of Mealy and Coue’s. Below are some pics of the Titchwell bird with two shots each of a Mealies and Coue’s. 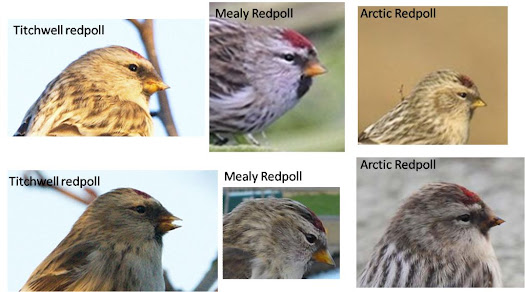 According to Svensson there is a difference between the distance between the bill tip and the base of the feathering. So is the classic conical appearance of Coue’s mainly a result of the ‘fluffier forehead’ mentioned by Sibley? I assume where the feathering is not present the bill and face shape looks very similar to a Mealy. Under what circumstances is that feathering not there? Sex, age or moult related?

This isn’t an attempt to be an expert, but since I’ve had to do a fair amount of work on this bird I thought I’d share what I’d learned. So, in summary, what do I think I’ve learnt?
1. Mantle ground colour can appear much darker and warmer, and that this often doesn’t show up in photos.
2. Coue’s can have obvious white tramlines just like Mealies
3. Bill size and shape has a massive overlap with Mealy and Arctics may not show the feathering that helps create the ‘punched in’ characteristic
4. Flank streaking can vary in appearance between tramlines and ‘whispy’ but exilipes can have very smudgy looking flank streaks and the ground colour can be quite strong buff. Overall substantial overlap with Mealy
5. ID descriptions based on white or pale grey ground colour are unhelpful. At most they apply to adult males and even here would probably exclude some genuine Coue’s
6. Even though there is some overlap with Mealy a bird that has white undertail coverts with just a thin dark streak when combined with a very white rump with just a few dark feathers should be flagged up as a possible Coue’s

Today I dragged the kids over to Bromley to take a look at the Long tailed Duck that's been hanging out at Hayes Farm for nearly a month. Wildfowl turning up in dodgy locations (like this tiny fishing lake in the middle of an urban common) tend to be viewed with a certain amount of suspicion. Still, it was too far away to throw bread at so I've decided it counts. 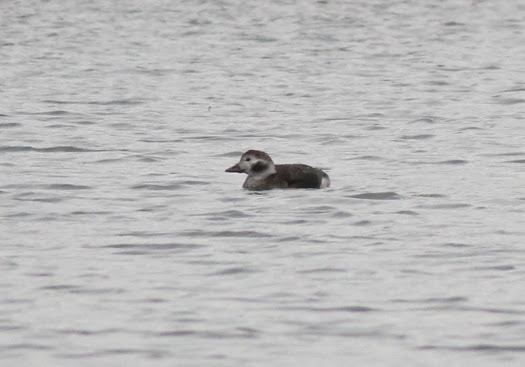 The shot below seems to show fairly long scaps, so perhaps an ad female rather than immature. 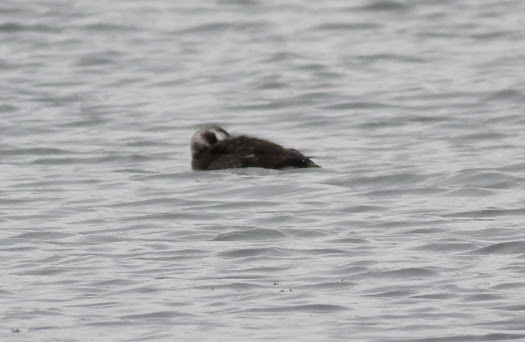 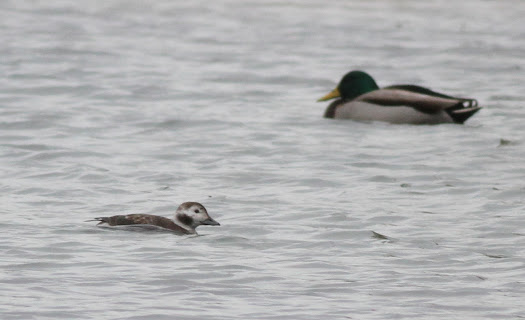 The boys had a brilliant time jumping in and out of puddles and whacking everything they could find with sticks.
0 comments

After Cley on Friday I headed for Titchwell where the Yellow browed Warbler showed quite well among the sycamores from the Fen Hide path. Also close to the visitor centre was a mixed flock of redpolls, mostly Lessers but including 3 Mealies. One of the Mealies was especially pale and my first thoughts were that it was a candidate Coue's, but longer views confirmed it as a very well marked Mealy. Although it had initially showed some classic Coue's features including:
1. deep white rump
2. Pale blond/ chamois leather colour over the face and upper breast
3. white white g cov bar
4. very white underparts with a single very thin dark streak on the UTCs
5. overall cold grey appearance
6. small black bib
7. fluffy underparts and leg feathering

But a number of features are more Mealy than Coue's, the most important of which are:
1. the mantle has some real warm tones which are not always visible in all lights but are easier to see in the field than in photos
2. the bill looks Mealy long with no impression of the 'punched in' face of a classic Coue's (apparently biometrics don't really support a bill size difference but feathering at the base of Arctic's bills always seems to make the shape sifferent)
3. the flank streaking is heavy and the ground colour is darker than even the occasional darker chamois wash of a Coue's
4. the rump is not completely unstreaked - although this is still within the range of Coue's

It was sufficiently interesting to do a bit of interweb research and go back to some of my old Mealy and Coue's field notes and photos.

A range of photos below showing the different features. 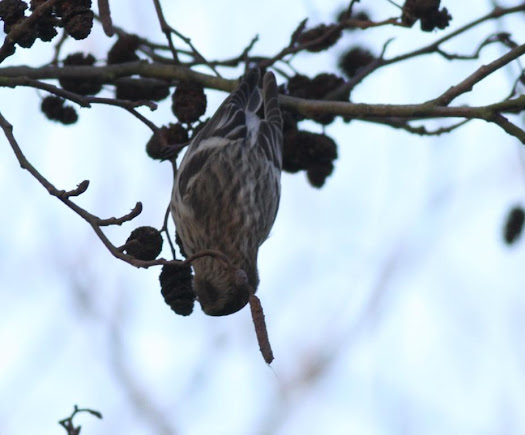 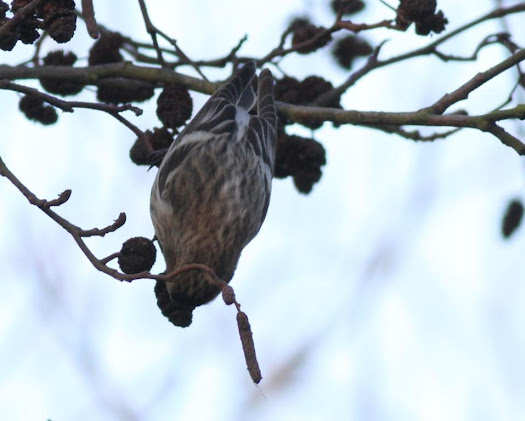 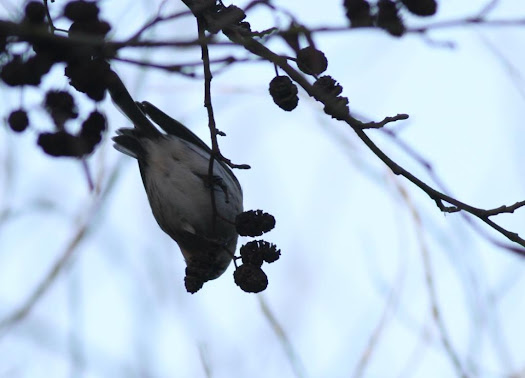 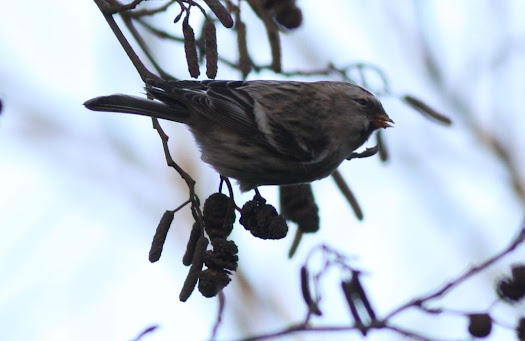 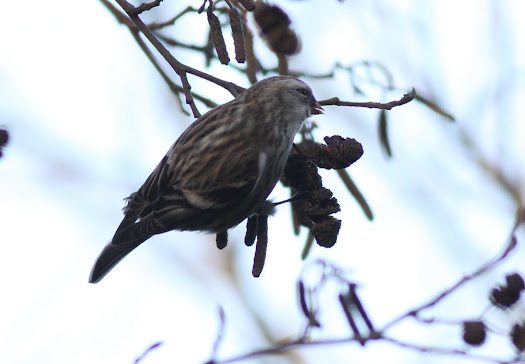 The bird is quiet easy to pick up since its currently regrowing most of its tailfeathers.
0 comments