A few productive hours at Rainham picking up the two Tundra Bean Geese (London tick having dipped the ones here a couple of years ago cos some eejit had parked outside my garage and blocked me in). Fairly long billed for Tundra but bill pattern spot on. Also on the scrape 500+ Wigeon, 14 Pintail, ~6 Pochard, 4 Ruff, some dodgy hybrid duck.
Had a wander round for the Slav/ Serin and found a Little Grebe where the Slav wasn’t, but a Barn Owl on the way back made up for it.
0 comments

Started at Leysdown for the high tide wader roost (including Sanderling) then drove down the potholed access track as far as it was possible to go (ie just before the bit that was flooded to several feet). Scanning the sea picked up a Black throated Diver and a flock of about 250 Wigeon. On the fields a flock of 1500+ Brent included two Pale bellied birds (an adult and 1st winter) and a probable Black Brant. Probable in this case because it was facing directly towards me - I could see the complete neck ring and even the white flank patches but couldn't rule out a hybrid on the views I had. But a shed load of other people have seen the bird so I’m sure there’s no doubt about the ID just bad views – unfortunately that makes it untickable for me.

Also decent numbers of Shelduck, Teal and Gadwall (regularly put up by a Marsh Harrier). Beyond the Brent were a flock of c30 White fronts (part of a larger flock reported in the area). Later found out that there’d also been a flock of Barnacles in the same area but no luck.

Drove down to Harty Ferry to check the Swale for Mergansers, then a massive blizzard hit the site – the other birder there headed off and I had to retreat to the car for a bit. Just as the blizzard stopped looked out of the car to see a big white, neck outstretched bird flying across the saltmarsh: Spoonbill. Landed in the saltmarsh and (despite disappearing every now and then) showed until I left 45 mins or so later. Nice surprise. Looking around the Ferry also picked up an ad male, then a juv Hen Harrier working the fields and saltmarsh.
0 comments

Had a brief burst of hope and exitement as three big swans flew downriver today. With the local reports of Whoopers I had high hopes of a patch mega for the fraction of a second it took to realise they were Mutes.

Also around: 1 GC Grebe on the Thames, 2 male Teal (why is always males here this year?), 14 Gadwall, 3 Grey Herons, 4 gull spp, including good numbers of Common Gull (at least 30), a couple of Grey Wags. Thought I heard a Mipit go over at one point but it was so faint it could have been any one of a number of squeaky things: kid's bike, rubber duck, reality show pop hopeful. But probably an unticked Mipit.
0 comments

No sign of yesterday's Pochard. 7 Stock Dove (on the north bit of the Common where they're not that regular), about 10 Tufties and a few Shoveler still left though.
0 comments

My first actual birding trip to Wandsworth Common this year (rather than taking the kids out for a walk). As usual the north bit of the common (above Windmill Road) is pretty quiet, but as I get to the trees a bushes at the edge of the road a couple of Redwing fly over and land in the trees.

The bushes in the new estate reveal a Goldcrest while a quick scan of the playing fields on the other side of the estate though produces a massive flock of thrushes: 260+ Redwing, 16 Fieldfare and a few Mistle Thrushes.

The ponds have Shoveler and a local rarity: Pochard. A really smart male. When I first visited Wandsworth Common there was a female Pochard on the same ponds for about 10 days so I though they were regular winter visitors, but this is the first one I've seen here since 2006. The rest of the Common produces a Coal Tit, a couple of Great Spotted Woodpecker(both spp in The Scope) and a flock of 6 Lesser Redpoll in the birches alongside the houses on the west side of the Common. A good morning and a 2010 patch list of 43spp.
0 comments

There's a Teal take-over of the Wandle. 5 Teal (all male) dabbling around all nonchalant. Also 9 Gadwall, Grey Heron, c25 Tufties and c20 Chaffinches on the weeds in the new daylight path.
0 comments

The Ruddy Organisation for Freedom and Liberty (ROFL) today announced that it would step up its campaign to prevent further mass slaughter of Ruddy Ducks. Earlier today we talked to a spokesman for the organisation who refused to give his real name but asked us to call him Lee.

Just because the randy little buggers can't keep their cocks in their feathers and are shagging anything that swims shouldn’t make them targets. We don’t cull politicians and sportsmen do we?

So far we’ve concentrated on spamming local forums with Ruddy Duck stories but we’re stepping up our campaign and we plan to start spray painting Ruddies as other species in the near future. We believe that spraying them as redhead Smew and Red crested Pochard will fool the DEFRA assassins.

We contacted other members of the bird fancying community to get their reaction. John Paulson a top twitcher with a British list of 551 told us:

I think the cull’s a great idea. In fact why not extend it to other species? I think everyone with a British list of over 550 should be allowed to nominate one species to wipe out in the UK. That would fuck over all those new kiddie listers – they're gonna have some major gaps on their list and we’ll have some bullet proof blockers.

I'd chose to wipe out Robins. They’re evil little fuckers who are always impersonating yank thrushes and tasty sibes. I've wasted hours chasing something that looked good only to find out it was a poxy Robin. And with no Robins to fiddle, the RSPB membership is gonna collapse which should mean that Humble woman gets the sack. Win-win I say.

We tried, in a half arsed way, to contact Miss Humble but she was unavailable for comment.
0 comments

Another trip out with the eldest boy. Wandered up to the mouth of the Wandle, parked the boy and scanned the creek. A flash of blue and orange and a splash - Kingfisher. I've seen them here quite a few times and I know it's a bit geeky to get excited by them, BUT, it's a Kingfisher! In the middle of London! Just a couple of yards away from a tip full of old PCs and sofas and bald Christmas trees. Honestly, how cool is that? Also around 8 or 9 Gadwall, c10 Tufties, a male Pintail (presumably part of the London plastic posse) and a Grey Wag.
0 comments

I’m a few days into my two weeks paternity leave and most days I take my eldest boy, (aged 14 months) out for a walk (well, mainly a push) while my partner looks after the new one . The walks tend to be to one of my two very local patches: Wandsworth Common or the mouth of the River Wandle. Both have a playground en route and between Billy’s sleeping and feeding times, and time spent at the playgrounds, I usually get about 10 minutes birding to either scan the ponds on Wandsworth Common or the mouth of the River Wandle and the Thames foreshore. Both also have good numbers of pigeons which the boy finds hilariously funny. Today it’s Wandsworth Common.
Much warmer than the last week, but the ponds on the Common are still partially iced over. These hold the highest count of Shoveler I've had this winter (19) along with 8 Tufties, c40 Mallard and 3 Mute Swans (adult pair with just one of last years chicks, I guess the rest have been taken out by dogs a and/or foxes).


Also around the ponds is a mixed flock of Goldfinch and Siskin with at least 3 Siskin including a nice bright male. Siskins have been present every winter since I started watching the site and the trees around the northernmost pond are one of their favourite places. The Siskins are a year tick (somehow its always nicer to get year ticks on the local patch).
0 comments

Snow, Staines and Smew but no Fudge

2010 was still missing a fair few quacks, so planned a trip to Staines Reservoir and Wraysbury. Targets were Smew, Scaup, Goosander, lack necked Grebe and Fudge Duck.
On arriving at Staines, a Snipe tazzed in front of the car . Up on the causeway the South Basin was covered in a thick layer of Pochard. I quickly picked up a redhead Smew, some Ruddies and a Black necked Grebe. Other birds included a couple more Snipe, c50 Wigeon, c30 Goldeneye, a Redshank, 2 Common Sands and a second redhead Smew. A face stripping NE wind made scanning the North basin difficult so the brown and white dots could have included the Scaup that was supposed to be hanging out there.
I headed for the car and a flyover redhead Goosander flew low over the causeway heading north, then gained height and headed north west.
Next up was a quick visit to Wraysbury to try and connect with the Fudge Duck reported from the BA pit. This was nearly completely iced over with only a small area of free water over by the sailing club. This held a couple of hundred birds that included a few Goldeneye and a female Red crested Pochard (presumably one of London’s feral birds). The story from the station car park was similar with only a tiny patch of free water where the stream flows into the pit occupied by half a dozen Teal.
Below - a few pics of Wraysbury all but iced over. 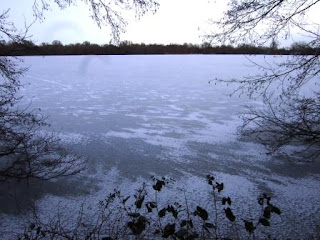 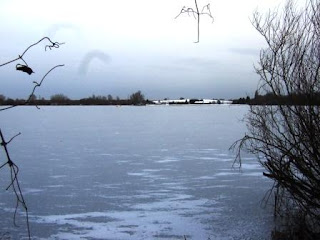 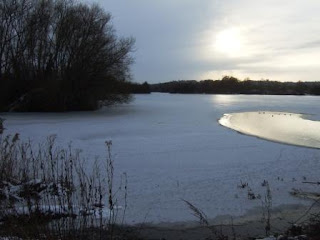 Cliffe was pretty much iced up with the access track more slippery than a politician's handshake. Good day, tho. Highlights were 4 Shorelark, c30 Pintail, 2 Goldeneye, Spotshank, Greenshank, Rock Pipit. Great views of the Shorelark on Flamingo as they fed in the open on the east side of the pool.
0 comments

Kicked off 2010 at one of my local patches, London Wetland Centre. 52 spp with a few nice birds: Mealy Redpoll (at about the 5th attempt), Bittern, really good numbers of Redwing (40+) and a couple of Chiffchaffs, dipped Cetti's for the 6th time.

Got rounded up by David Lindo for photo supposed to show a bunch of birders in spring. Except it's January and it's friggin freezing. We shed the hats and gloves and unzipped the jackets... to show about 5 layers of fleeces. Ahh, the ways of these media types.
0 comments