Off to the Wandle today with the boys and high hopes. The reason for the high hopes is the chance of getting 7 species of gull and 2 patch ticks. I'm confident of picking up the usual gulls (GBB, LBB, Herring, BH) and also have a chance of Common Gull (already picked up on the patch by Mr Thing two weeks ago). There's also the chance of picking up the ad Yellow legged Gull that's been loafing around for a while and that I originally saw about 3 weeks ago and which has been seen since. Even more majorly there's the chance of a Med Gull that was seen over the Wetland Centre a couple of days ago (as the gull flies only a mile or so from the patch boundary). Clean up on those and it would mean a massive 7 gull species day. The Med would also be a patch tick, as would Redshanks seen both just outside the patch (by Nathalie) and, even more tantalisingly, actually on patch mud just 2 days ago. So the target is 7 gulls spp and 2 patch ticks.

At the Wandle mouth it looks like a few of the local species have had a good breeding season with four juvenile Blackbirds, at least 3 juv Greenfinches and a single Goldfinch in the immediate area. 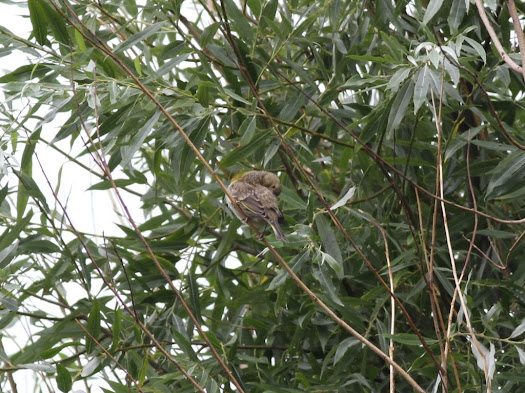 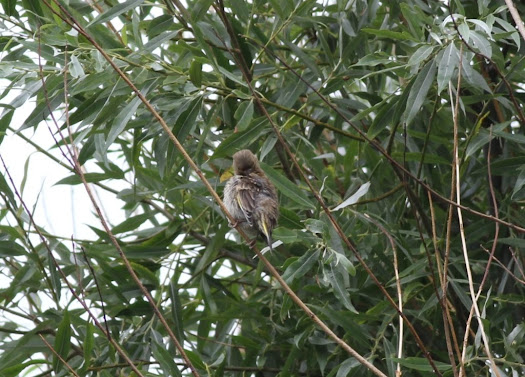 A couple of Mute Swans on the Wandle Delta 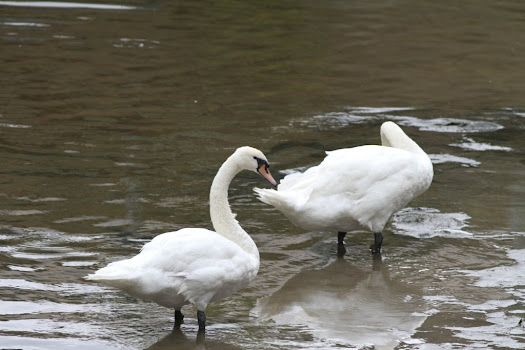 One of the local Greylags with Canuck. 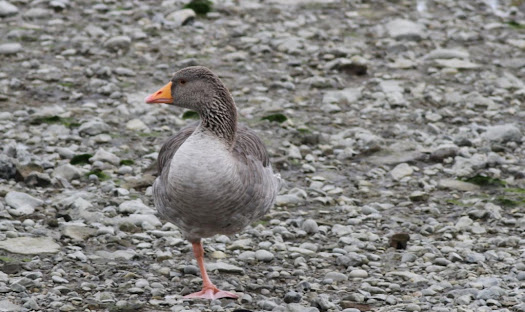 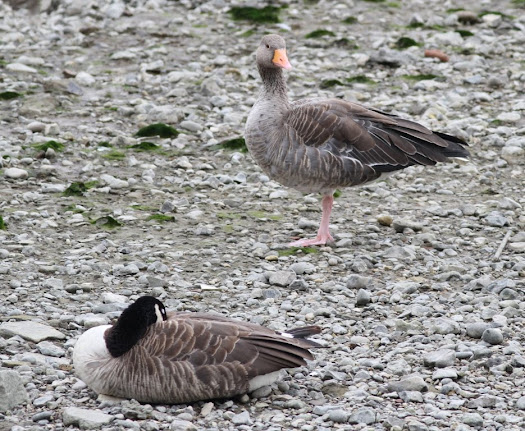 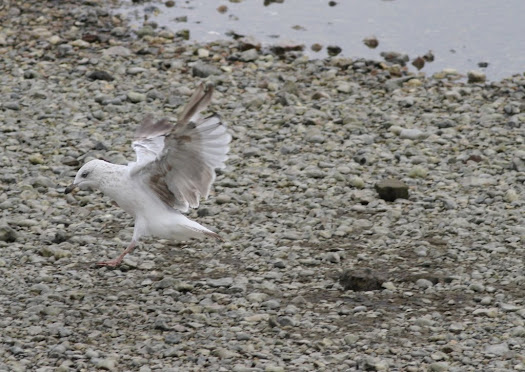 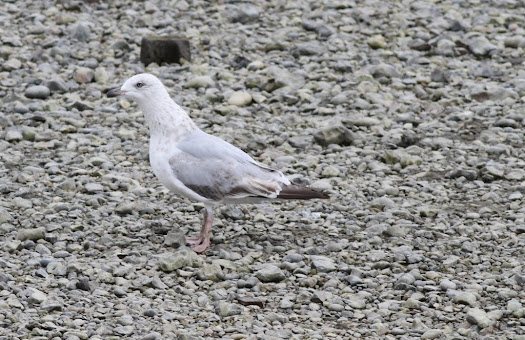 Male Sparrowhawk over the Thames 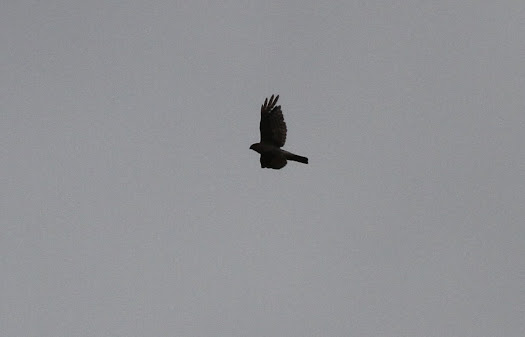 The Yellow legged Gull of a few weeks back is still around - a bit closer this time. 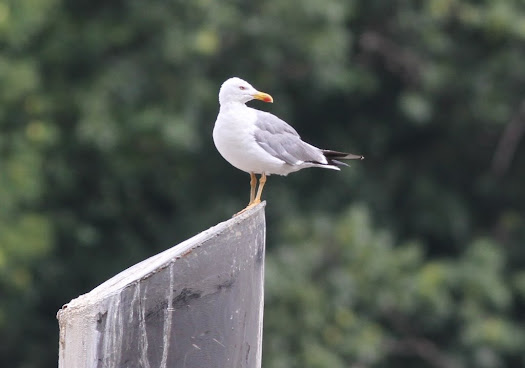 Fairly slow on the patch with a Common Tern fishing over the Thames. 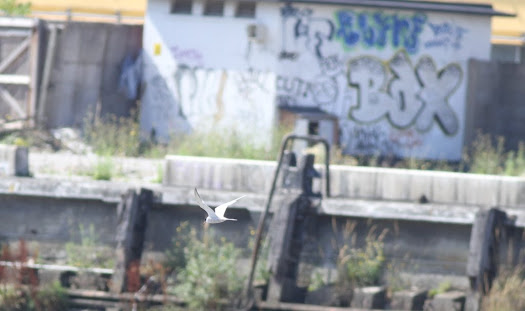 A GBB in flight. 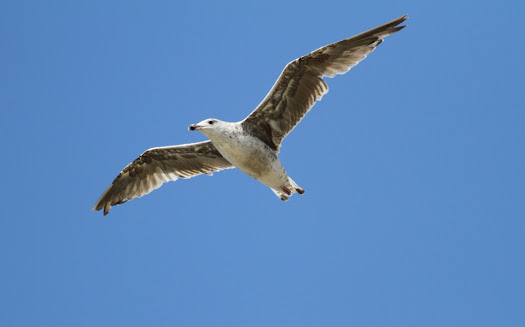 Wandle Delta had 4 female Tufted, around a dozen Mallard including 3 half-grown chicks (from two different broods)

Further along the Thames up to Wandsworth Park there were around 50 Mallard, c40 Black headed Gulls including 2 juveniles and 1 bird moulting into 1st winter, 30+ Canadas and a Grey Wag flying upriver. No sign of the YLG from two weeks ago.
0 comments

Family holiday in Cornwall staying right on the sand on Porthmeor in St Ives - just down from St Ives Tate. Right at the start of the seawatch season and family stuff precluded any real birding, but just setting up a scope in the sitting room managed to pick up daily totals of 10+ Kittiwake, 15+ Shag, 200+ Manx Shear, 10+ Gannet, 3-4 local Rock Pipit including a couple of recently fledged juvs and a few Common Terns. Also had 4 Guillemots on Sunday.
0 comments

Slimbridge slips one in

Bizarrely it looks like the White tailed Plover Lapwing has bought a guide to the UK's RSPB and WWT reserves and is touring all of them. Yesterday it was Rainham, today it's Slimbridge. Tomorrow maybe it's the London Wetland Centre...... It being in Slimbridge presents an interesting problem. Today's the first day of my family holiday, to Cornwall. The usual debate about A303 v M4/M5 now looks a bit more one sided, especially if it looks more like M4-M5 north-Slimbridge-M5 south. Downsides are that my partner's bored shitless/ borderline hostile not remotely interested in birding. I'm driving so it's just possible I could get lost, north, south, easily done.

As it turns out tolerant partner is up for a stop off to feed the kids and break up the driving, although with time limited viewing privileges. We'll talk about what happens if it doesn't show after we're there......

As it happens, speed walked quickly strolled to Zeiss Hide and scanned - to see this. 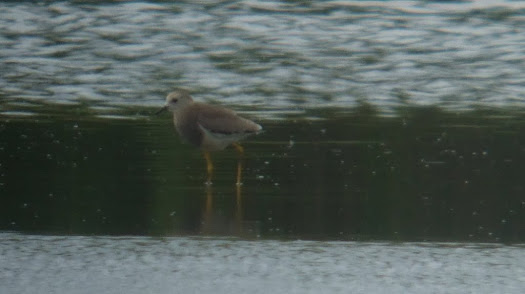 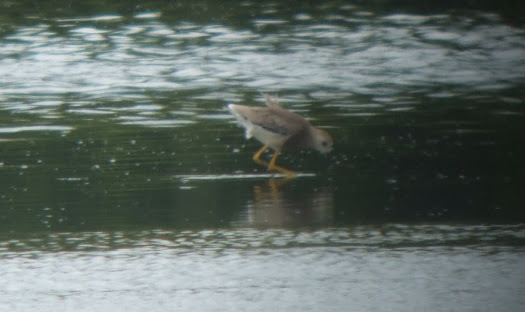 Or actually an in-focus version of these dodgy camera handheld to scope shots. Really stunning bird - long legs and a hint of a crest lying over the nape.
0 comments

OK, I can write about this now. Not having been able to get to Rainham the prevoius night (Thursday 8th), arrived at 6.30 Friday morning for a pre-work twitch, Howard having done a brilliant job of getting the place open first thing. Initial optimism quickly waned as a steady stream of birders gave up to clock in. Aveley Pools did have some decent birds though, 6-7 LRPs including at least 2 juvs, 2 Blackwits, a couple of Green Sandpipers and an adult Yellow legged Gull with the other LWHGs. Also a couple of juvenile Redshank (good news - none at Barnes this year) which were determinedly misidentified as Wood Sands.
0 comments

Today is a really momentous day - nope, not Independence Day, not even Yellow legged Gull Day (a patch tick for me, although not a new bird for the site) but it's the day that the date of my blog entries finally match today's date. Today I write about today. This is real time news. The momentousness of this is in no way lessened by the fact that no one's reading this.

Usual walk out with the kids, stop off at playground, scan the Thames (1st summer GBB, a few LBB and Herring Gulls, a couple of cormorants) then on to the mouth of the river Wandle. 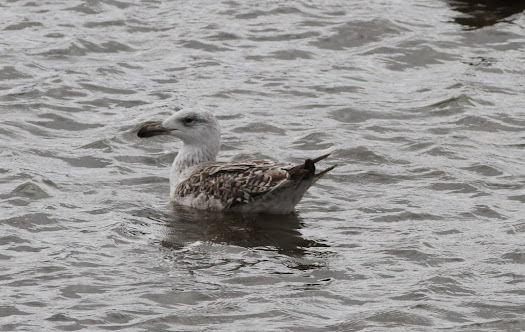 Wandle had about 20 Mallard, 7 Tufted, with the males all going into eclipse. The walk along the daylight path and Thames to Wandsworth Park turned up a few more Mallard and Tufted, with 10+ House Martin from the colony on the corner of the park. Then picked up a possible YLG on a post that immediately flew off and headed to the other side of the river before flying around again and landing on one of the barges further out and further upriver - but close enough to get  a positive ID as a YLG. A few photos below. 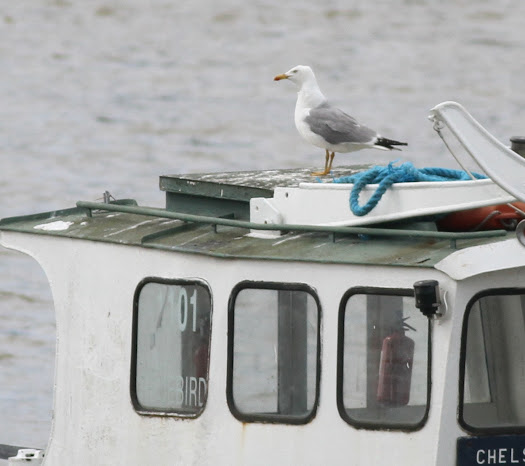 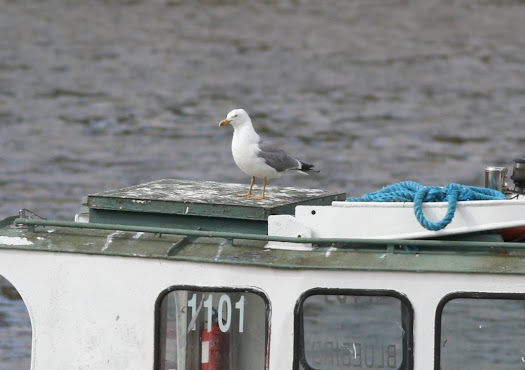 And a very heavy crop 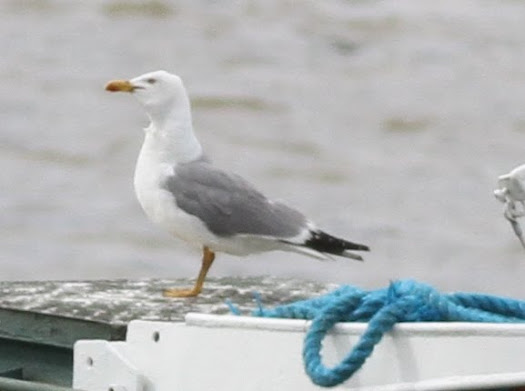