Trip out to Suffolk today, starting at Westleton Heath. When I was last here a couple of years ago the place was crawling with Dartford Warblers. Today, zip. Last winter must have wiped out tens of pairs here. Did pick up a couple of flyover Woodlark, 2 Stonechat, loads of Whitethroats, Willow Warbler. Headed off to Dunwich Heath to try and pick up Dartford there - a quick scan from the car park almost immediately produced a male and female. I wonder why the birds here have survived when the ones at Westleton have been pretty much wiped out, maybe being close to the sea kept just enough snow off and kept a few more insects alive.

Next stop was Minsmere. Heading round to Island Mere hide, a couple of Bullfunch flew across the track - picked up the male feeding in small trees. At the same point (by a dead tree) a Garden Warbler was carrying food. 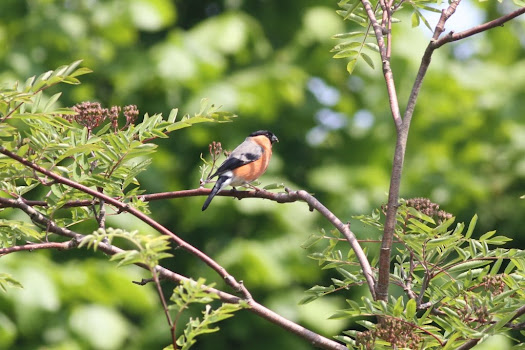 Arriving at Island Mere, scanned for Fudge Duck, but didn't pick anything up immediately. Although looked up at the right moment to see 8 Spoonbil flying to the south east. Next scan picked up a Aythya type diving repeatedly - light was really grim so it turned into a piece by piece id. Some of my worst record shots below. Eventually settled down to preen, gave a couple of wing flaps and fell asleep. 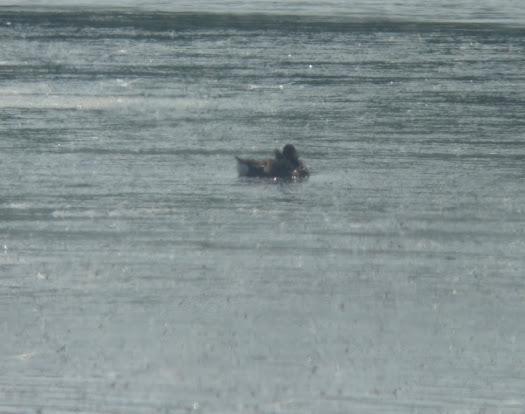 The scrape produced a Little Gull, a couple of Med Gulls, 2 Blackwits, a couple of Dunlin, Ruff, Little Tern and at least 20 Spotshank in summer plumage. Possibly most interesting though, was a Common Tern with a dark, red-based bill. Obviously first reaction was Roseate Tern, but everything else was Common Tern. Currently doing some research, but it looks like it's not as unusual as I thought.
0 comments

Female showing a very abraded tail but the male's tail seems pretty intact. Presumably the female's tail has got a bit shredded on the nest while the male has been bringing food (or doing nothing....).

Female with abraded tail below 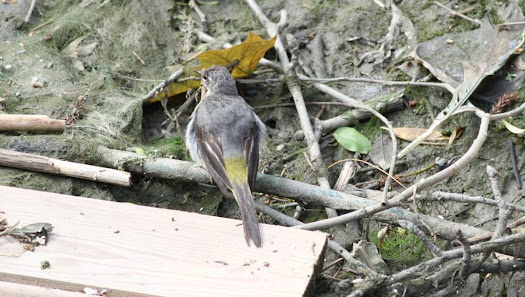 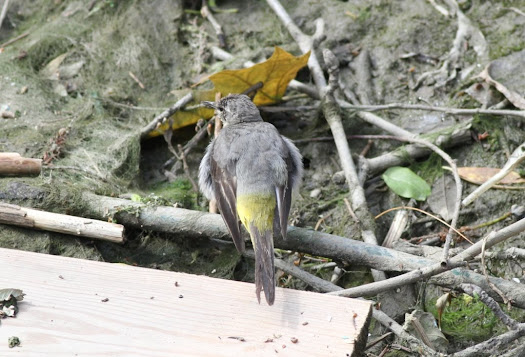 While the male's tail looks in good nick.

Female on a trash can 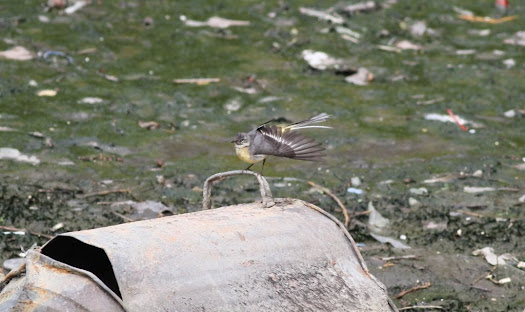 Also the pair of Gadwall are still dabbling around.

Dunnock singing from the Daylight Path 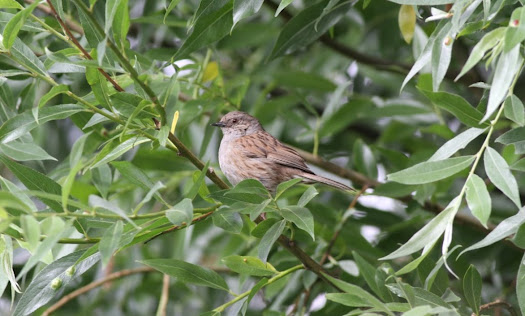 The Big O (Lakenheath and Weeting)

Trip up to Lakenheath to try and pick up Golden Oriole. The last time I came here was about 25 years ago when there was no visitor centre just loads of trees. This time walked through reed beds alongside the plantations to the furthest where at least one Golden Oriole was singing. Headed up to the viewpoint where the Cranes were sometimes around but no luck. Apparently one of the pairs had lost their chicks earlier in the breeding season. Did get great views of Bitterns (a dozen or so views of probably 4 individuals) and Marsh Harriers. 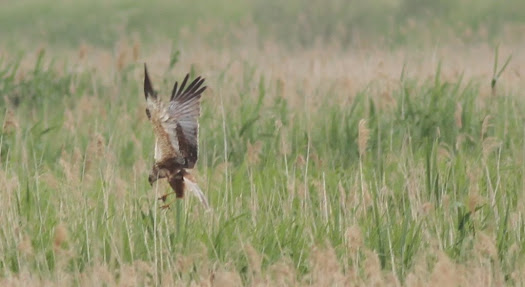 This Sedge Warbler was singing not far from the path on the way back. 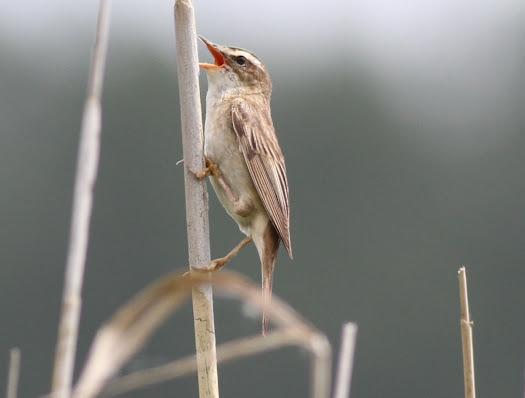 Paid to get into Wales, drove some more and eventually got to Blorenge - the only word to rhyme with orange - how cool is that. Unless you're french, in which case orange rhymes with pretty much anything.

Didn't have to wait too long for the Marmora's to show, initially north of the path about 30 feet away giving amazing views for about 4 secs. It then went on a big circuit eventually showing well south of the path in Holly and other bushes. Frequently singing and occasionally doing little sing flights. Also around a few Ravens, 2 Whinchat. 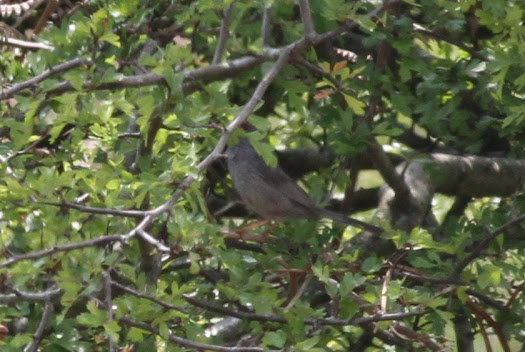 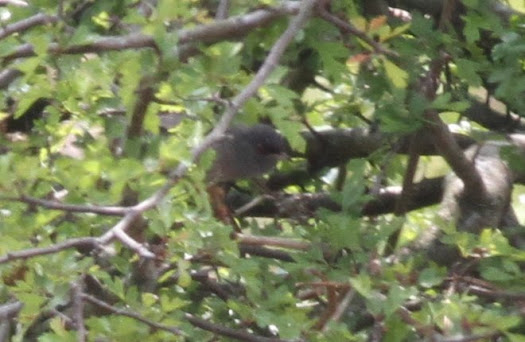 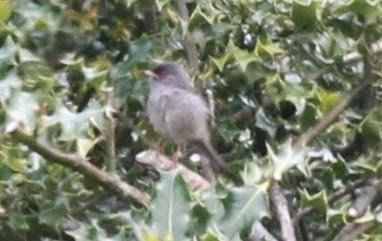 A distant Whinchat perching and taking off. 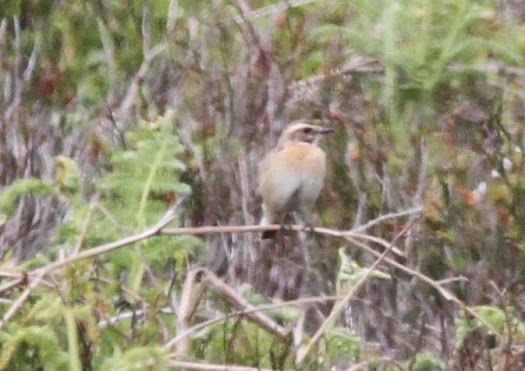 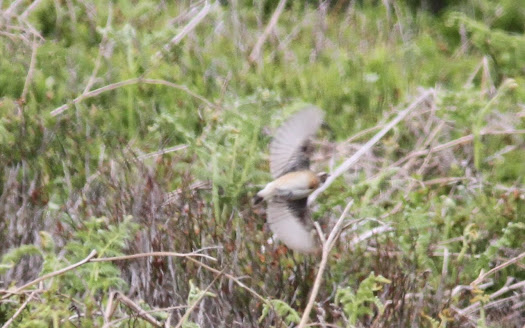 Next headed off to Llanthony Valley where picked up a single Pied Fly, 2-3 Wood Warbler, Marsh Tit, 2 Garden Warbler.