The plan for today is have a pootle around a number of Thames sites to pick up a bunch of waders for the year. On offer are Curlew Sand, Little Stint, Wood Sand, a Pec, Red necked Phalarope and a KP. Throw in the usual stuff and we could be talking about 20 species of waders in a day (and six year ticks). Since I spent my formative birding years next to the Thames and weaned by Redshanks I do have a soft spot for waders. While my British List is pretty meagre, waders do feature quite strongly and, while missing quite a few goodies (no Short billed runt Curlew for instance) it has its highlights (courser on the local patch, hat tricks of pratincoles and lapwings, all the peeps except Long toed, PGP when it wasn't a trash bird, Sharp tailed and Stilt Sands and one of the few real blockers on my list: Little Whimbrel Curlew.
Got to East Tilbury post childcare in time to join the group of birders who had just seen the KP fly upriver. Wandered upriver to try and track it down and, while picking up 4 Curlew Sand plus a bunch of usuals (2 godwit spp, RPs, Dunlin, Avocet, etc) couldn't relocate the plover. Spent quite a few hours here but eventually gave up as the tide moved further and further out and headed off to Vange where a Red necked Phalarope had been around for the last few days. The place is a bit of a bugger to find but it's a brilliant site. The easiest thing to do is park in Wat Tyler in the first car park through the gates. head back up the road over the level crossing and turn left down a footpath opposite the station car park (and alongside White's Aggregates). turn left when you get to the start of the overpass, back over the railway line then go right until you can see the scrape ahead. There's a path that runs round it with occasional viewing mounds. The initial scan turned up an imm Spoonbill, 4 Dunlin an ad Little Stint, 3 Greenshank, several Green Sand, 11-12 Spotshank (including 10 all together), but no sign of the phalarope. Moving onto the next viewing mound and scanning around another group of birders turn up who've been watching it from the other side of the scrape - looks like it's in the north east corner. Another birder on the mound quickly picks it up - a really smart juv RN Phalarope swimming around - bit distant but the usual unidentifiable digiscope shots possible. (TBC)
0 comments

First visit to the London Wetland Centre for a while - a couple of hours in the late afternoon when the place has already been burnt up by the local families thrashing the bushes for rare acros. Despite this, while getting out of the car had a Sparrowhawk being mobbed by a Common Tern over the car park. Plenty of chicks around with 2 broods of Mute Swans, at least 4 of Tufted, 1 juv GC Grebe still associating with its parents, a Little Grebe (with just one chick), loads of Coot and Moorhen juvs around,
Also on site c50 Teal, c15 Shoveler, 4 Common Tern, 4 gull spp, still around 20 Sand Martin, Peregine with a kill on the hospital. Passerines really thin on the ground (see acro thrashing above). 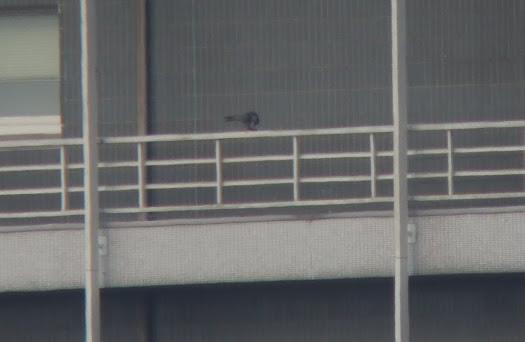 Also tried an experiment with the new(ish) camera looking at the difference between using converters and cropping more. Overall I think the results are, err, inconclusive. These are the two shots at 400mm and 560mm (ie a 400mm lens with a 1.4 TC attached). Both are compressed down to around 300kb. Same bird at approx the same distance (400mm shots probably slightly closer). 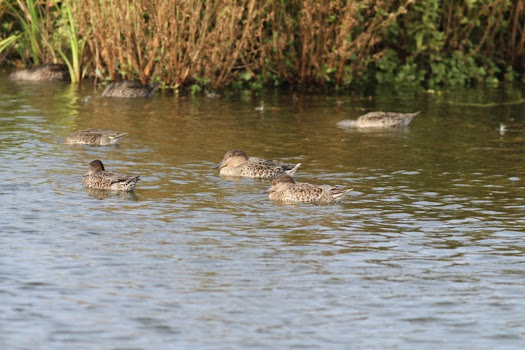 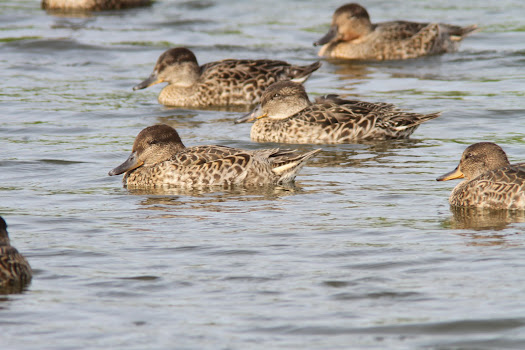 Cropping both the shots to around the same size gives the following two pics (400mm first then 560mm). 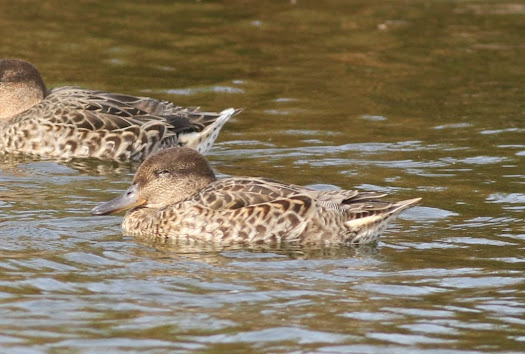 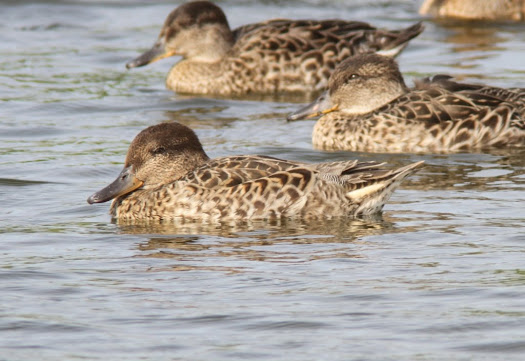 The Tufties on the Common tend to have a pretty mixed breeding record. There are usually 1-2 broods every year (although occasionally none). This year looks like a fairly average year with two broods, but one of them has 8-9 ducklings in. The question over eight or nine is because there's a female Tufted with 8 ducklings following but there's another ducking of the same age bobbing around in the middle of the pond being ignored. The other brood is made up of two older birds. Also around 8 other Tufted on the ponds. Also on or around the ponds are 1 Egyptian Goose, 8-10 Moorhen including at least 2 juvs.

In The Scope there is at least one juv Robin, a Chiffchaff calling (I assume they've bred here again this year, but haven't seen a juv yet); Sparrowhawk.
0 comments